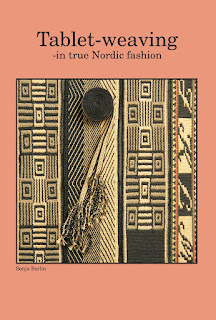 3,000 copies were printed, ready for collection from the printers on the afternoon of May 12, 1994.  On May 13 160 tablet-weaving enthusiasts arrived in Kalmar and the county museum to take part in the  three-day symposium.

The participants were from Sweden, Norway, Denmark, Finland, Iceland, Estonia, Germany, Holland and France!  The display comprised 300 square metres of original items from the sixth century right up to modern textile art – the technique with all its possibilities.  A three-day tablet weaving party, with meetings giving the opportunity for the expansion of contact networks.

The first edition of the book sold out in 2001.  A smaller edition of 450 copies was printed in 2005.  This is now available once more in connection with a sequel printed in 2017.  Many years have passed, full of content, and it is my plan to tell all.

The true history of tablet weaving in the Scandinavian countries will probably never be written.  New archeological discoveries are constantly being made, and we are still creating new ways to use the technique for new purposes.

You can order this book from:
in USA:  Eugene Textile Center. 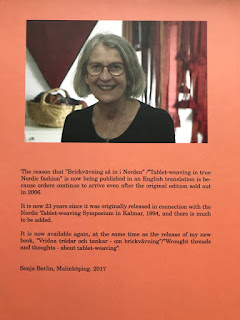